On top of Castle Rock is the impressive Edinburgh Castle. All info, tours and tickets for visiting this castle in Scotland's capital.

When you visit the Scottish capital Edinburgh, a visit to Edinburg Castle is a must do. It is one of the most important buildings in the city, the oldest part of which dates back to the twelfth century. However, a large part of the buildings date from the 17th century, when Edinburgh Castle no longer served as a royal palace, but as a garrison castle. This link with the military has preserved the castle; the Regimental Museum and the National War Museum are still housed in Edinburgh castle. You can also find other buildings in the castle, such as the Royal Palace, where the jewels of the Scottish royal house are displayed and you can find the coronation stone, the Stone of Scone. 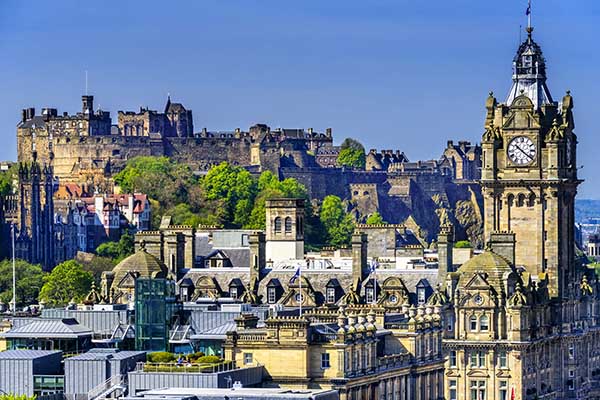 The striking Castle of Edinburgh

History of the castle in Scotland

Edinburgh Castle has a rich history and is located on the volcanic Castle Rock, so the castle had a strategic position. The first structures of which the fort consists were built in the twelfth century and many historians believe that Edwin of Northumberland was the founder of the castle. St Margaret's Chapel dates from these early days of the castle. From the twelfth century part of the castle was used as a prison and in 1510 the Great Hall was built by order of King James IV. Edinburgh Castle also played a role in important conflicts between Scotland and England, such as the Scottish War of Independence in 1300 and the Jacobite Rebellion of 1746. According to various studies, the castle has been besieged no less than 26 times, making it one of the most besieged castles in the United Kingdom.

The Great Hall was commissioned by King James IV and completed in 1511. The Great Hall is characterized by its wooden ceiling, which rests on stones carved into heads and Scottish symbols, such as the thistle. Visit the space, where the great banquets and affairs of state took place. When Cromwell's army captured the castle in 1560, he converted the Great Hall into barracks for his soldiers and later into a military hospital. The Great Hall has today been restored to its original state and displays arms and armor to the public.

St Margaret's Chapel for the Royal Family is the oldest building in Edinburgh Castle. King David I built the chapel for his mother Margaret, who died in the castle in 1093. Today, St. Margaret's Chapel is open to visitors, but marriages are still held in this chapel. The graceful arches are still in their original state, while the stained-glass windows, for example, have been renewed.

Another highlight is the, for that period, advanced cannon Mons Meg, which is named after the Belgian place where this cannon was manufactured. In 1457 the cannon was given to King James II. The weapon weighed no less than six tons and was capable of firing a cannonball of one hundred and fifty kilograms for 3.2 kilometers. In 1681 the barrel of the cannon cracked and it was no longer fired. In 1829 the gun returned to Edinburgh after being away from Scotland for seventy-five years.

Tour of the museums in the castle

Edinburgh Castle can be called a museum in itself; nowadays it houses a number of well-known museums, such as the National War Museum, the Royal Scots Museum and the Royal Scots Dragoon Guards Museum. The latter two are collectively referred to as the Regimental Museums. The different museums are included in your ticket of Edinburgh Castle.

From time to time, a number of high-profile events also take place at the Scottish castle. Concerts are held annually in the castle during the summer during the Edinburgh Festival Fringe. The One O'clock gun is fired daily at exactly 1 o'clock and every year the square in front of Edinburgh Castle is also used for the Military Tattoo.

Do you want to visit Edinburgh Castle?

Important! Before you could buy Edinburgh Castle tickets at the box office, but since covid it is highly recommended to book tickets online due to limited capacity. The price of your ticket depends on which way you visit Edinburgh Castle: independently, with an audio guide or with a guide.

Where is the castle in Edinburgh?

Edinburgh Castle is located on top of Castle Rock and is the starting point of The Royal Mile in the Old Town of Edinburgh Scotland.

Our readers say
4.8 (95.85%) 8 reviews
November 21, 2022 Martin: "We had a fantastic holiday in Scotland thanks to the good tips about activities, sightseeing and places to visit in Edinburgh."
Top 20 Attractions
Edinburgh Castle
Old Town & Royal Mile
Transport in Edinburgh
Airport transfers
Excursions in Scotland

Looking for travel inspiration? Also have a look at our Neuschwanstein travel guide.